So What’s the Deal with 5G?

The new wireless technology is creating aviation safety concerns – but as always, there’s more to the story 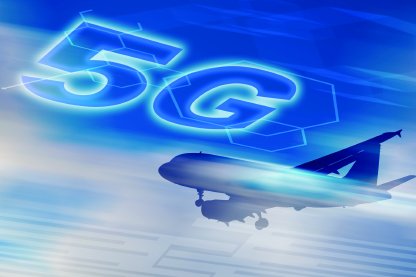 Early in January, AT&T and Verizon made news by voluntarily delaying the activation of their much-vaunted 5G service on towers near some US airports, following warnings from the aviation industry and the Federal Aviation Administration that the rollout of 5G would pose a risk to aircraft and potentially cause flight cancellations – or worse.

The telecommunications giants had originally been scheduled to fire up their C-band 5G networks late last year. However, as the deployment loomed closer, calls from the airlines and aircraft manufacturers to revisit the safety questions around 5G technology grew louder, so the telecoms agreed to delay until Jan. 5.

In December, the FAA issued a pair of airworthiness directives based on concerns that potential interference from C-band 5G wireless services could pose a safety risk to air traffic and lead to flight diversions. Then on the eve of the rollout, in a letter to the White House, the FAA and Federal Communications Commission, the CEOs of major US carriers urged that the planned implementation of 5G be halted within two miles of many US airports. "Unless our major hubs are cleared to fly, the vast majority of the traveling public will essentially be grounded," they wrote in the letter.
As part of a stopgap solution, the FAA announced the creation of buffer zones around 50 airports in the US, including 17 of the top 20 busiest airports in the country. Still, FAA warned that “even with the temporary buffer around 50 airports, 5G deployment will increase the risk of disruption during low visibility.”