Signs of the Times

Once again, today’s airports are proving that ‘science sufficiently advanced is indistinguishable from magic’ 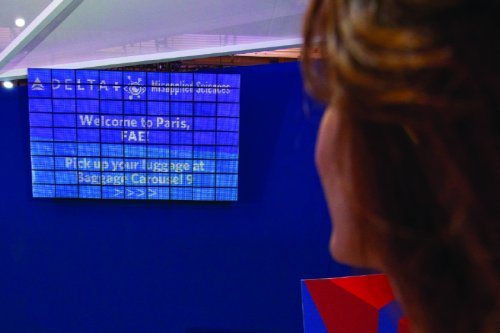 As air travel descends from flying through the dark clouds of a two-plus-year pandemic, the industry is finding itself landing on some very different ground. While topics like sustainability and operational glitches have dominated headlines, a less chaotic but equally far-reaching aviation evolution has been changing the groundside experience for travelers.

In June, Delta Air Lines officially opened its new Terminal C at New York’s LaGuardia Airport. The 1.3-million-square-foot facility replaces the airline’s old C and D terminals, giving passengers access to a total of 37 gates spread across four concourses through a centralized departures and arrivals hall, officially known as the Delta Sky Way at LGA.
Likewise, April saw the carrier debut a new Terminal 3 at Los Angeles International, part of a $2.3 billion investment at the Southern California airport. And in December 2021, the airline together with New York officials broke ground on a $1.5 billion expansion of its Terminal 4 to consolidate operations at John F. Kennedy International. It’s all part of a $12 billion investment the carrier is making on the ground and in the air.

However, the ambitious plans are revealing more about the future of air travel than just increased square footage and stylish design (although certainly these are also evident in abundance in most newer airports across the globe). The real game-changer is in the technology that’s coming online to enable the passenger’s experience.

For example, Delta’s Sky Ways at both LGA and LAX feature a digital backwall in the check-in lobby that’s longer than the wingspan of a 777-300. The display features TSA wait times, wayfinding in both English and Spanish as well as Sky Club volume and gate information. In airports across its system, Delta is continuing to roll out features that let customers make use of their ‘digital identity’ – which consists of their SkyMiles Member number, passport number and Known Traveler Number – for checking luggage, passing through security and boarding their flights, all without having to show a government ID or paper boarding pass.