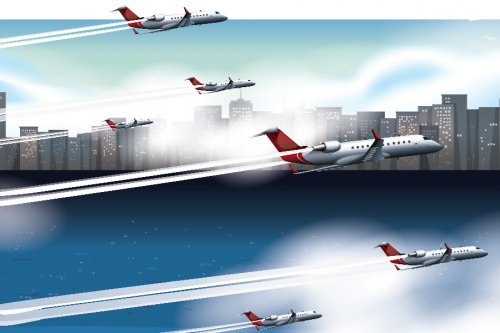 Pick a spot on the planet at random, stick a pin in it and chances are it’s beset by the blues: war, electoral uncertainty, and all-around angst.

There have been all sorts of stories of late predicting how this global turmoil will affect business travelers and what the long-term effects will be. However, a hard, dispassionate look at the numbers paints a positive picture of solid growth during the past few years – of traffic numbers literally climbing a wall of worry.

The tiger’s take of that good news emanates from Asia, where according Airline Network News and Analysis no fewer than 47 new nonstop routes between North America and Asia have been launched over the past five years. That’s a 50 percent jump.

Asian ascendance may be a given, but the stealth story is North America to Europe. ANNA reports that market has added 84 new routes during the same five-year period, a 24 percent gain.
Buoying the belief that airline travel to the continent and the UK is still solid is this report from the International Air Transport Association: “European carriers saw February 2017 demand grow by 6.5 percent compared to a year ago. Traffic has resumed its growth after the terrorist disruptions in 2016, supported in part by momentum in the regional economy. Capacity (the number of seats) climbed 3.4 percent and load factor (the percentage of seats occupied by paying passengers) surged 2.4 percent to 81.1 percent.”

Corporate travel managers know seats are tight. Airlines have worked to keep it that way. The carriers continue to make sure too many seats don’t chase too few fannies in fruitless pursuit of market share. Precisely how long they can keep that up remains the question. That’s because of the squadron of new low-fare airlines entering the North American– European market.

Consider this: International Airlines Group (the parent company of Aer Lingus, British Airways, Iberia and Vueling) is launching a new low-fare, no-frills fledgling dubbed LEVEL. Beginning in early June, LEVEL is set to start nonstop service between Barcelona and both Oakland and Los Angeles. The routes will be flown with a pair of new Airbus A330s fitted with 293 economy and 21 premium economy seats.

For travelers working for small businesses, entrepreneurs or folks who just want to save some money, premium economy is requisite. If you’re willing to put up with fewer choices such as low-frequency flights, it might make good sense. Furthering the case for giving LEVEL a go is the fact fliers can earn and burn Avios points, the loyalty currency that is honored by other IAG airlines.

The choice of Barcelona as LEVEL’s home base is no afterthought. IAG CEO Willie Walsh says this “will allow customers to connect from Vueling’s extensive European network” to both LAX and OAK.
Even as LEVEL gets set to launch, low-fare Norwegian reported 12 percent passenger growth in March with its new nonstop service to the United States and more to come. Come September the carrier will begin flying direct from London Gatwick to both Seattle/Tacoma and Denver. Norwegian CEO Bjorn Kjos says, “The growth is primarily driven by our international traffic.” Norwegian is particularly keen to make a success of the services to SEA and DEN – high-tech, high-profile business destinations both.
As with most low-fare international airlines, Norwegian’s long-haul flight frequencies are limited – a real consideration for there-and-back, change-at-the-last minute corporate travelers.

Business Travel Will Accelerate in Second Half of Year, Says Deloitte Survey

IAG Restructures Ownership, Board to Comply With Brexit Agreement