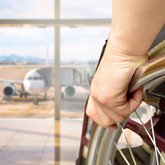 US airlines either damaged, lost or delayed delivery of 2.06 percent of the wheelchairs and motorized scooters they carried in January, which was the first full month for which the carriers were required to report this data to the Department of Transportation. Of the mainline US carriers, American and Southwest reported the worst results in wheelchair and scooter handling. American and the regional airlines flying under the American Eagle brand mishandled 5.89 percent of the wheelchairs and scooters they carried in the cargo areas of their planes during January. At Southwest, the reported rate was 4.09 percent. Both airlines told the DOT that they are still perfecting their procedures for counting every wheelchair they enplane. Delta and its regional network reported the best wheelchair and scooter handling among the 10 reporting mainline carriers, with a loss, delay or damage rate of 0.84 percent. Allegiant was next best, followed by United, Alaska, Hawaiian, JetBlue, Spirit and Frontier.
Site TitleSite Slogan