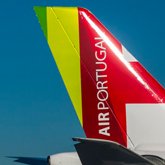 TAP Air Portugal will launch a new route between Lisbon and San Francisco beginning June 10. The route will operate five days a week (except Wednesdays and Fridays) with the flight departing for Lisbon at 10 a.m. and arriving in San Francisco at 2:40 p.m. The return flight departs San Francisco at 4:10 p.m. and arrives in Lisbon at 11:25 a.m. This is TAP’s first entry point into the US West Coast, part of an overall strategy of growth in the US. Antonoaldo Neves, CEO, said the goal is to make the US among the “most relevant” markets for TAP, along with Brazil. San Francisco will be the carrier’s eighth destination in North America and the third new destination for TAP in the US next year. The other new gateways are Chicago and Washington, with operations beginning on June 1 and June 16, respectively.
Site TitleSite Slogan