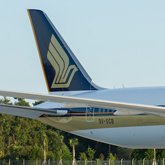 Singapore (SIA) Airlines has announced that Osaka will be the first scheduled destination for its new Boeing 787-10 fleet, with service expected to begin in May. SIA said it will be the world’s first carrier to operate the aircraft and has 49 on firm order. The airline will debut its new regional cabin products on the 787-10s, fitted with 337 seats in two classes, with 36 in Business Class and 301 in Economy. The 787-10 is the longest model of Boeing’s Dreamliner range of aircraft. Tan Kai Ping, vice president-marketing planning for SIA, said the aircraft will be a key element of the company’s overall growth strategy, enabling the carrier to expand its network reach and strengthen its operations. In addition to the 787-10 order, SIA has a firm order for 20 Boeing 777-9s, which are due for delivery starting in the 2021/22 financial year.
Site TitleSite Slogan