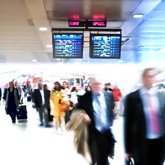 An estimated 246.1 million passengers will fly with US airlines between June 1 and Aug. 31, 2018, according to an estimate from the trade group Airlines for America (A4A). The group pointed to a strong economy and “historically low airfares” for helping fuel what’s expected to be a record summer for travel. John Heimlich, A4A’s chief economist, said that “as the economy grows along with household net worth, passengers are taking advantage of persistently low airfares for their summer travel plans.” The forecast would be a 3.7 percent increase from last year, when a record 237.3 million travelers flew on US airlines during the same period. Collectively, A4A says US airlines have added 116,000 extra seats to their summer schedules in anticipation of the 2018 spike in passengers. According to A4A, the price of domestic air travel, including fees, has fallen by 12.5 percent since 2014.
Site TitleSite Slogan