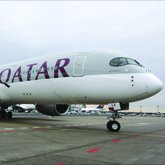 Qatar Airways has indicated it has an interest in acquiring approximately a 10% stake in American Airlines, according to a statement by American. That carrier, along with Delta and United, has repeatedly accused state-owned Qatar Airways and its regional rivals Etihad and Emirates of enjoying massive government subsidies to the disadvantage of U.S. carriers. The U.S. carriers want the federal government to review the Open Skies agreements that allow the Gulf carriers to fly freely from the United Arab Emirates and Qatar to any U.S. destination. Qatar Airways said in a statement that it sees a “strong investment opportunity” in American and that it intends to build a passive position in the company with no involvement in management, operations or governance.
Site TitleSite Slogan