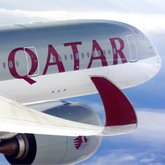 Qatar Airways has introduced its new Business Class seat, Qsuite, on fights from Chicago O’Hare International Airport. Qsuite is already available at both John F. Kennedy International Airport in New York and Washington Dulles International Airport. Qsuite features what the carrier calls the industry’s first-ever double bed available in business class and customizable private cabins for up to four people. Qsuite also offers adjustable panels and movable TV monitors in the center four seats. Qsuite will be fitted on the airline’s Boeing 777-300 ER out of O’Hare and will later be introduced on the Airbus A350-900 aircraft from New York – the first US destination to feature Qsuite on that aircraft. Qatar Airways operates more than 200 aircraft flying to six continents.
Site TitleSite Slogan