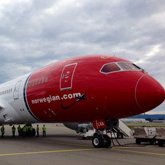 Norwegian Air is ending flights from Stockholm and Copenhagen to the US due to weak demand and technical problems affecting the engines on its Boeing 787 Dreamliners. Matthew Wood, senior vice president-commercial, said that Scandinavia isn’t a big enough market to maintain intercontinental flights from Oslo, Stockholm and Copenhagen. The carrier will continue Oslo service. Wood also said the airline has been struggling with the Rolls-Royce engines on its long-distance aircraft, which means having to keep more planes on the ground, affecting schedules. Norwegian said it will increase frequencies from several European cities to US destinations, although it did not provide specific plans. On Nov. 12, the company announced nonstop routes from Chicago to Rome and Paris, and between Denver and Rome.
Site TitleSite Slogan