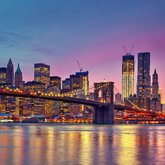 New York is the most expensive city in the world for business travel, according to a new report from ECA International, management consultants. Swiss cities dominate the list, with Geneva, Zurich and Basel at nos. 2, 3 and 9 because of the country’s strong currency. London is out of the top 10, said ECA, possibly because of Brexit. The ECA report takes into account the average cost of four-star hotel accommodations, meals, drinks, laundry, transport and other essentials. Other factors also play a part, including general demand. Simon Franklin, daily rates manager at ECA, said that higher safety risks can drive rates because of fewer hotel rooms and higher security demands. Other cities might rank high because they have so much visitation from tourists. Also in the top 10 are Luanda, Angola (4); Bridgetown, Barbados (5); Paris (6); Nassau, Bahamas (7); Washington DC (8); and Monaco (10).
Site TitleSite Slogan

US Hotel Pipeline Up Strongly in January