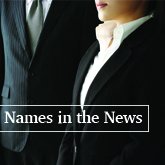 Airlines for America (A4A) has named Patricia Vercelli as senior vice president, general counsel and secretary. She brings more than 20 years of experience in the airline financial services industry, most recently with the Universal Air Travel Plan (UATP). At A4A, Vercelli will be responsible for the association’s legal and corporate governance, overseeing the General Counsel’s office and providing corporate secretary functions.

Visionapartments has named Max Thorne as senior board director, and Ralph Busser as COO. Thorne has over 30 years of experience in the serviced apartments industry and has held senior roles at BridgeStreet Global Hospitality. He created the Beyonder aparthotel brand for Oaktree Capital Management’s platform. Ralph Busser has 20 years of experience in Swiss real estate and was owner and founder of several firms, including Blue Hour Invest AG and SOL Property AG.

Addison Lee, a global ground transport provider, has named Mike Fogarty president of Addison Lee Group North America (ALG NA), stepping up from his role as CEO of the US arm of Tristar, Addison Lee’s chauffeur-driven business. The company also named Tim Rose as chairman, ALG NA. He will take on a strategic role developing new opportunities for the business in North America.  Rose previously worked for Flyte Tyme. They will be joined by a new CFO, Todd King, formerly CFO for Adeco Group North America. Addison Lee entered the US market in 2016 with the acquisition of Tristar.

Furnished Quarters, a provider of temporary furnished apartments, has promoted Victoria Yanakos to executive vice president of sales, responsible for company-wide overall sales and revenue development. With over 10 years of corporate housing industry experience, Yanakos
joined Furnished Quarters in 2013 and has held several positions since. Prior to that, she worked for BridgeStreet Worldwide in New York and London.

Alaska Airlines has promoted Shane Tackett to executive vice president of planning and strategy, leading the newly created division within the airline. He is an 18-year veteran of Alaska and previously served as vice president of revenue and e-commerce.