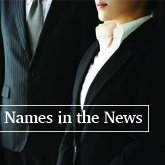 Kimpton Hotels & Restaurants has named Ginny Too as senior vice president of people & culture (the company’s HR department). She will be responsible for creating and executing Kimpton's HR strategy and guiding regional P&C teams. Prior to this role, Ginny led operations and corporate functions as vice president of HR for the Americas at Kimpton's parent company, InterContinental Hotels Group (IHG). She has three decades of experience in the hospitality industry in the U.S. and Singapore. She received an M.S. in counselling and personnel services from Purdue University.

Sojern, a technology marketing firm, has appointed Carl Livadas as vice president of data science. He will be working on accelerating the automation of revenue optimization. Prior to joining Sojern, Livadas worked at Nanigans; and also held positions at Kayak. He holds five degrees from MIT, including a PhD in electrical engineering and computer science.

BridgeStreet Global Hospitality, the serviced apartment company, has appointed C.A. Anderson as senior vice president of global development and real estate. He will focus on the company’s new brands -- Mode Aparthotel and Studyo. He previously served as managing director of investments for Cambria Hotels & Suites of Choice Hotels International, where he was responsible for unit growth by driving capital market strategy for the brand team. Anderson has more than 30 years of real estate and operations experience. He was president and COO of a privately-owned hotel operating company; executive vice president at Interstate Hotels & Resorts; and has held executive positions with other hospitality and real estate companies.