May Hotel Performance Stronger than Expected 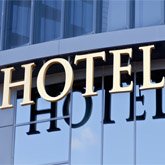 The May hotel performance for the US was stronger than expected, according to STR, the industry statisticians. After two months of sub-2 percent growth, May revenue per available room (RevPAR) grew 2.5 percent. Occupancy grew 0.9 percent, the strongest increase since August 2018. And average daily rate (ADR) rose 1.6 percent, low but higher than had been projected. All of this, according to STR, was driven by a demand increase of 2.9 percent. Nine years into the current “up-cycle,” said STR, the industry is still finding many more new travelers and occupancies continue to rise. The latest report said that rate growth for the rest of the year is expected to be highest on the high end, likely driven by corporate demand and low unemployment rate for white-collar workers that drives leisure demand. The largest RevPAR increase in May was in Denver (7.0 percent), followed by Boston (6.6) and Philadelphia (5.9 percent).
Site TitleSite Slogan