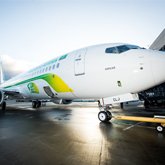 Mauritania Airlines International has received a Boeing 737 MAX 8 airplane, becoming the first operator of the aircraft in Africa. Mohamed Radhi Bennahi, CEO of the carrier, said the introduction of the plane into the fleet will help to grow the network as it introduces new routes to Europe and the Middle East. The 737 MAX 8, said Bennahi, delivers the highest efficiency, reliability and passenger comfort in the single-aisle market by incorporating the latest engine technology, wings, interiors and other improvements. Founded in 2010, Mauritania serves more than 10 destinations across Africa and Europe from its base at Nouakchott-Oumtounsy International Airport in Mauritania’s capital city of Nouakchott. The airline operates a fleet that includes one Next-Generation 737-800, one Next Generation 737-700, two 737-500s and the new plane.
Site TitleSite Slogan