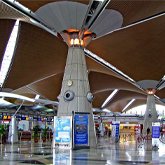 The route between Kuala Lumpur International Airport and Changi Airport, Singapore, has the highest number of flights, according to the latest Busiest Routes report from OAG. Of the 20 busiest international routes, 15 are in the Asia-Pacific region; on average, seven carriers operate on those routes. Eight of the top 10 busiest long-haul routes originate in North America. With 15,587 flights over 12 months, the service between New York (JFK) and San Francisco (SFO) topped the long-haul list, followed closely by New York (JFK) to London Heathrow (LHR), with 14,196 operating flights. Three of the busiest medium-haul routes are domestic routes in China, starting or ending in Beijing. The busiest short-haul route is between Jeju International Airport and Gimpo International Airport in China, which is also the busiest domestic route in the world, with almost 80,000 annual flights.