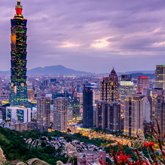 The busiest airline route in the world is from Kuala Lumpur to Singapore, according to OAG, the flight information provider, which said that 30,537 flights traversed that route between March 1, 2017 and Feb. 28, 2018. In its latest OAG Business Routes study, OAG reported that Hong Kong to Taipei was a close second. In Europe, the routes from Dublin and Amsterdam to London Heathrow were the busiest, ranking 14th and 19th, respectively. John Gant, senior analyst with OAG, said these routes are among the most competitive in the world. He said that given the demand, frequency and consumer choice on these routes, airlines are investing heavily to maximize capacity, profitability and market share. He said frequency, on-time performance, connectivity and the in-flight experience all play a critical role in the battle to lead these markets.
Site TitleSite Slogan

Travelers See Improvements But Not Cure-All in Airport Technology