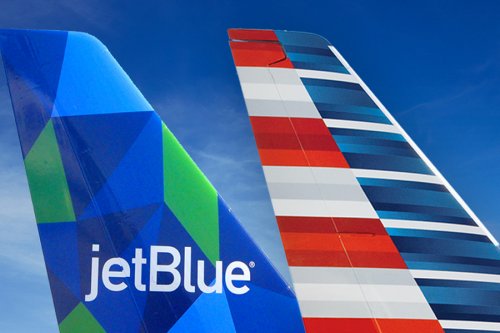 Calling the Northeast Alliance of American Airlines and JetBlue “an unprecedented maneuver,” the Department of Justice has filed suit in federal court to block the agreement launched earlier this year. The Justice Department, joined by six states and Washington, DC, says the agreement between the two carriers would stifle competition in the New York and Boston markets and “significantly diminishes JetBlue's incentive to compete with American elsewhere.”

In January the Transportation Department cleared the way for the strategic alliance between the two carriers during the waning days of the Trump administration. The DOT agreed to the alliance based on certain concessions, including giving up slots in New York and Washington, and assurances the carriers would not cooperate on setting prices.

However, antitrust lawyers at the Justice Department reportedly began examining the deal this spring. The Justice Department lawsuit comes after President Joe Biden issued a sweeping executive order in July establishing “a whole-of-government effort to promote competition.” The order called on DOJ to “challenge prior bad mergers that past administrations did not previously challenge.”

Attorney General Merrick Garland said in a statement, “In an industry where just four airlines control more than 80 percent of domestic air travel, American Airlines’ ‘alliance’ with JetBlue is, in fact, an unprecedented maneuver to further consolidate the industry. It would result in higher fares, fewer choices, and lower quality service if allowed to continue.”

Both American and JetBlue have said they will fight the lawsuit. The carriers claim the alliance is pro-consumer because the combination creates a stronger competitive force in the Northeast, countering the dominance of rivals Delta and United. According to JetBlue and American, prior to the partnership, the two controlled 16 percent of the region’s air travel market, a number that has grown to 24 percent since they started to coordinate flights in the Northeast.

Already the carriers say the alliance has allowed them to start 58 new routes from four airports in New York and Boston, increase frequencies on other routes, and plan new international destinations. In a statement, American CEO Doug Parker said “Ironically, the Department of Justice’s lawsuit seeks to take away consumer choice and inhibit competition, not encourage it.”

The Justice Department complaint alleges the Northeast Alliance creates a "de facto merger," a characterization which both Parker and JetBlue CEO Robin Hayes dispute. “This is not a merger,” Parker said. “American and JetBlue are – and will remain – independent airlines.”

In response to the DOJ assertion that the alliance would hinder JetBlue’s competitive stance toward American, Hayes pointed out that his carrier started flying from New York to London and between Miami and Los Angeles, both important routes for American. "This is not at all like a merger with American – we have two different business models and are not working together on pricing,” Hayes said.