Agreement will take effect in March 2018 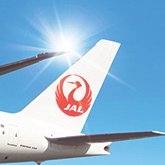 Hawaiian Airlines and Japan Airlines have signed a partnership agreement that provides for extensive code-sharing, lounge access and frequent flyer program reciprocity; the agreement takes effect March 25, 2018. Through the agreement, JAL passengers will have unlimited access to Hawaiian’s neighbor island and Japan-Hawaii network, including nonstop flights between Honolulu and Sapporo; Hawaiian Airlines will have full access to JAL’s domestic network. Loyalty members for both carriers will be able to earn miles on the code-share flights with further opportunities for accrual and redemption of mileage to be expanded later; and guests will have access to both airlines’ lounges. Hawaiian Airlines had been in an alliance with JAL’s rival, All Nippon Airways, since 2012; that code-sharing deal will end next March.