Delta is second, according to Cirium, with Europe showing best record of any region >> 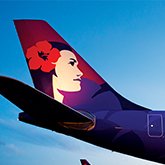 Hawaiian Airlines had the best on-time performance among major North American carriers in November, followed by Delta Air Lines, according to Cirium's monthly on-time performance report. Cirium, a data and analytics company, reviewed carriers that are in the top 30% in terms of flight frequency, total seats (filled and unfilled) and available seat kilometers in North America and ranked the top 10 by on-time arrival percentage. In Europe, the total on-time arrival percentage for the top 10 airlines in the region reached 89.33%, which was higher than any other region. Each European airline in the top 10 maintained a Completion Factor — the percentage of tracked flights that were actually flown — above 99%, indicating very few cancelled flights for these airlines throughout the month. David White, vice president of business development at Cirium, said that of all the regions, Europe has the strictest regulations around delay reporting. The high Completion Factor, he said, “is an impressive achievement for these airlines.”