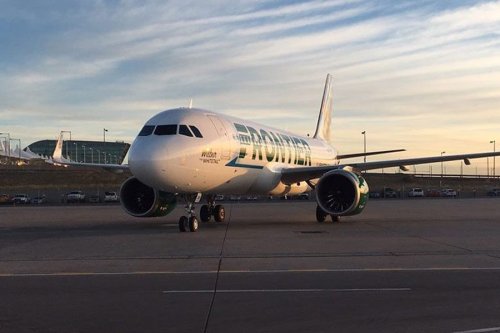 Frontier Airlines, the low-cost carrier, announced 13 new nonstop routes from two new airports: Chicago Midway International Airport (MDW) and William P. Hobby Airport (HOU) in Houston. The expansion in the two cities complements the carrier’s existing services at Chicago O’Hare International Airport and George Bush Intercontinental Airport in Houston. New routes from MDW include Atlanta; Dallas; Denver; Las Vegas; Ontario, Calif.; Phoenix; Tampa; Trenton, N.J.; Fort Lauderdale; and Orlando. All of those are daily except Trenton, which is four times weekly. All the routes will launch on either April 28 or 29 except Fort Lauderdale and Orlando, which begin Oct. 13. New routes from HOU include Cancun (three times weekly beginning May 26), Las Vegas (four times weekly beginning May 27) and Orlando (four times weekly beginning May 27). Daniel Shurz, senior vice president of commercial, said the carrier’s growth in 2021 was “nothing short of remarkable.” He said Frontier continues to look ahead at new opportunities to grow both across the US and internationally. The carrier offers customers the ability to customize travel to their needs and budgets. For example, travelers can purchase options a la carte or in one low-priced bundle called the WORKS. The bundle includes refundability, a carry-on bag, a checked bag, the best available seat, waived change fees, and priority boarding.