Delta to Return to India in December 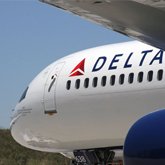 Delta will launch service between New York’s John F. Kennedy International Airport and Mumbai, India beginning Dec. 22. The service is made possible by 2018 agreements between the US and the governments of the United Arab Emirates and Qatar to address Open Skies-violating government subsidies to state-owned carriers.  Delta will fly the route with a newly renovated Boeing 777-200LR, featuring seatback entertainment throughout, WiFi connectivity, free mobile messaging and full-spectrum LED ambient lighting.  Aircraft will offer Delta One suite, Delta Premium Select, Delta Comfort+ and Main Cabin options. The carrier had flown the route from 2006 to 2009, according to the announcement, but was forced to suspend the service in 2009 “as illegally subsidized Middle East carriers made the route untenable.”
Site TitleSite Slogan