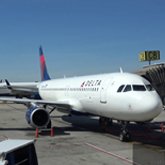 Delta Air Lines reported a record second quarter that beat Wall Street’s estimates, with strong corporate travel partially driving revenues and profits. Delta’s revenues jumped 8.7 percent while earnings rose 32 percent over 2018 – aided by a record domestic load factor of 89 percent. Glenn Hauenstein, Delta’s president, said in a press release that with record passenger loads, customer satisfaction and $1 billion in revenue growth, “demand for Delta’s customer-focused product and service has never been stronger.” The carrier reported a 10 percent increase in premium ticket revenue and double-digit percentage gains in loyalty, reflecting demand by frequent travelers. Also contributing to Delta’s success, according to some analysts, is that it does not fly the Boeing 737 MAX, which has been grounded. The airline thus avoided having to make adjustments to route schedules.
Site TitleSite Slogan