Move is in response to crowded conditions in ‘banner year’ >> 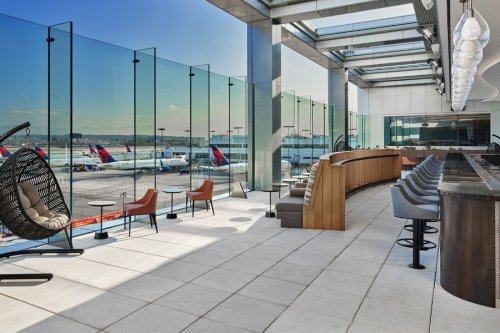 After a “banner year” in which Delta Air Lines’ Sky Club lounges saw crowding and people waiting in line to get in, the carrier announced price increases in memberships and entry fees for the facilities.

To address the crowding, the airline is changing some of the ways customers can access clubs starting next year “to preserve a best-in-class experience.” Among the changes:

For Diamond Medallion members who select Executive Club access via their Choice Benefits:
For Delta Sky Club members flying in the main cabin or a more premium cabin:
For customers flying In Delta One and select Medallion members flying in Delta Premium Select internationally:
There are no updates to Delta Sky Club access eligibility for Delta 360 members; Elite Plus members of other SkyTeam airlines; Delta and SkyTeam Elite Plus members flying in Delta Premium Select and Delta One (or partner airline equivalent) cabins; or any customers in Delta One (or partner airline equivalent) cabin.

Beginning next month, Delta Sky Club members in Atlanta and Detroit will be able to monitor club availability on the Fly Delta app. Clubs will display four occupancy levels ranging from “not busy” to “extremely busy,” helping customers better plan their visits.

Dwight James, senior vice president-customer engagement and loyalty, said that while the carrier is “thrilled” to see so many customers enjoy the lounges, the goal now is “to balance the popularity of the clubs with the premium service and atmosphere for which they were designed — and that our guests deserve.”

Since April, Delta Sky Club has opened four new clubs, including its two largest at New York’s LaGuardia Airport and Los Angeles International Airport; the airline’s only international club at Tokyo’s Haneda Airport; and a new space of more than 22,000 square feet at Chicago-O’Hare.

Elsewhere, major expansions of existing clubs in Nashville and Boston have significantly increased capacity at those locations. Across the network, according to the announcement, Delta has invested heavily in its clubs with increases to seating capacity, premium design updates, locally driven food and beverage offerings and more.