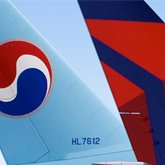 Delta Air Lines and Korean Air have launched a joint advertisement campaign, Greater One, to mark the first anniversary of the partnership between the two carriers. The ad touches on the customer benefits offered by the airlines. The campaign consists of two short videos, one about the airlines’ routes and one about the comprehensive benefits of both companies. The video about the airlines’ network introduces the newly launched Boston and Minneapolis routes. In the comprehensive version, more flight options, convenient airport transfers, and improved air mileage accrual are covered. Since the joint venture agreement, Korean and Delta have expanded their network and provided various scheduled options for customers, connecting more than 290 cities in the Americas and over 80 cities in Asia.