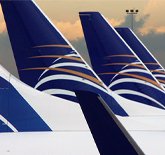 Latin American airline Copa Airlines achieved the top spot in the 2019 Punctuality League conducted by OAG; the carrier had an on-time performance (OTP) of 89.79 percent. Ranked 4th in the 2018 Punctuality League, the airline has improved its OTP by more than 3 percentage points. Copa Airlines takes the lead from airBaltic, which drops into second place by a narrow margin due to a small decline in OTP for the Latvian airline. Third and fourth were Hong Kong Airlines and Hawaiian Airlines. Ranked fifth, Bangkok Airlines has seen a dramatic improvement in its OTP, which has risen from 77.58 percent last year to 87.16 percent. In North America, Hawaii kept the top spot while Delta retained its second-place ranking; both had slightly improved OTP over the previous year.