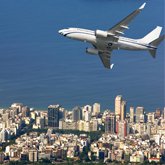 A bill that would allow foreign airlines to fly domestically within Brazil is awaiting the signature of President Jair Bolsonaro. The measure, passed by Brazil's House and Senate last week, builds on a temporary decree signed in late December by outgoing President Michael Temer that allows for 100 percent foreign ownership of airlines operating in the country. The previous limit was 20 percent. Bolsonaro had 15 days from the Brazilian Senate's passage of the legislation on May 22 to sign it into law. Domestic flying in Brazil is dominated by three airlines: LATAM, Azul and Gol. Currently, Delta Air Lines owns 9.4 percent of Gol, the leader in domestic flights in Brazil. Qatar Airways owns 10 percent of LATAM, Brazil’s No. 2 domestic airline. United Airlines owns 8 percent of third-place
Site TitleSite Slogan

LATAM to Continue 95% Cuts Through May