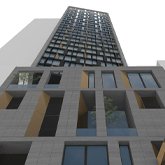 The world’s tallest modular hotel is scheduled to be erected late this fall in New York City with prefabricated and pre-furnished guestrooms. The 360-foot-tall property is expected to open in late 2020 as the Marriott-branded AC Hotel New York NoMad. The 168-room, 26-story hotel will rise with prefabricated guestrooms arriving at the site fully constructed, inside and out. Besides finished, painted walls, each “module” will contain a fully outfitted guest room – with beds, sheets, pillows, flooring and even toiletries. The hotel’s roof and rooftop bar are expected to be produced using modular construction, and its more customized public areas such as the restaurant and lobby are expected to be constructed using traditional methods. Eric Jacobs, chief development officer, North America, select and extended stay brands for Marriott International, said that having the world’s tallest modular hotel in one of the world’s great destinations “will act as a game-changing symbol to ignite even greater interest in modular among the real estate and lending industries."