Reward points transfers will be accessible outside Middle East and Africa to a total of 16 countries, including US 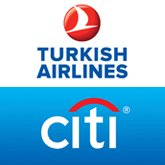 Turkish Airlines has reached an agreement with Citibank to expand the scope of an existing cooperation in rewards points transfer. The contract, which previously allowed for customers to transfer Citi Rewards Program Points to Turkish Airlines Miles & Smiles frequent flyer program in the Middle East and African regions, will now include global access across 16 countries. The new locations in which travelers can use reward points include: US, Australia, China, Hong Kong, India, Indonesia, South Korea, Malaysia, Mexico, Philippines, Singapore, Taiwan, Thailand, United Arab Emirates, Bahrain and Vietnam. Turkish Airlines,  which claims to fly to more countries than any other airline in the world, flies to 300 destinations with 251 of them international and 49 domestic.