System is expected to help with record passenger numbers 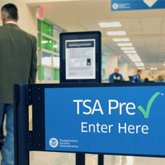 The Transportation Security Administration announced last week that 5 million travelers have enrolled in Precheck, the expedited screening program. Precheck is one of several programs with a total of more than 10 million members that aim to keep travelers moving quickly through security checkpoints, even as a record number of passengers fly this summer. Because TSA knows more about Precheck members, the program typically allows travelers to leave their laptops and small containers of liquid in their carry-on bags; and to keep wearing shoes and light jackets at checkpoints. Precheck began in December 2013 as a way for TSA to expedite screening for better-known travelers who belonged to airline frequent-flier programs, but travelers can now apply to participate in Precheck for $85 for five years. “By growing the trusted traveler population, we help our officers focus on potential threats, which strengthens the security screening process and ultimately provides better security for all travelers,” TSA Acting Administrator Huban Gowadia said. TSA screened a record 17 million passengers and crew members during the first week of July.