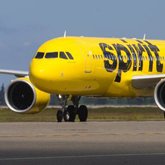 Spirit Airlines ranked worst among major airlines in negative Twitter mentions while Southwest ranked first, according to an analysis by InsureMyTrip, a travel insurance company. It analyzed over 96,000 tweets mentioning the nine largest US carriers during two weeks in August using a “sentiment analysis tool” from Brand 24. Frontier Airlines followed with 64% negative mentions, receiving the highest number of complaints about “customer service.” At the other end of the ranking, Southwest Airlines topped the list with 70% of its Twitter mentions considered positive. Allegiant Air and Alaska Airlines followed closely with 64% and 62% positive mentions, respectively. “Delay” is the most commonly tweeted negative keyword overall for eight of the nine airlines, with United Airlines receiving the highest negative percentage for this keyword (23.6%). This is followed by “cancel” – the most popular negative keyword for Spirit Airlines overall (18.5%) – and customer service takes third place.
Site TitleSite Slogan