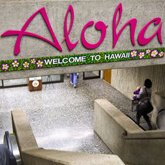 Hawaii airports (Honolulu on Oahu and Kahului on Maui) are considered the least stressful as far as cancellation rates, followed by Salt Lake City and Atlanta, according to a new study from InsureMyTrip, a travel insurance company.

The report predicts New York's LaGuardia (LGA) will no longer be most stressful for travelers, as the facility has improved its cancellation rate this year. The airport previously reported the highest percentage of canceled flights in the country for both 2018 and 2017 (with winter storms a factor). Chicago airports have endured a rough patch with on-time performance issues. Chicago O'Hare International and Chicago Midway International are currently experiencing the highest cancellation rates in the country, based on available 2019 data. Those numbers don’t yet include last week’s snowstorms, which grounded over 1,000 flights. The report also found that flights scheduled for departure between 4 p.m. and 6 p.m. are more susceptible to delays and cancellations.
Site TitleSite Slogan