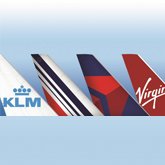 Delta Air Lines on Monday announced the launch of its expanded joint venture partnership with Air France, KLM and Virgin Atlantic. The single joint venture links together the previous deals Delta had with the European airlines. Starting Feb. 13, frequent flier program members can earn or use miles and get flight benefits on any of the four carriers. The partner airlines are also aligning their flight schedules to reduce connection times. In addition, travelers will soon be able to check in or choose seats on any of the airlines’ mobile apps or websites, according to Delta. The partnership covers up to 341 peak daily transatlantic flights on 110  routes, and allows more connections in North America, Europe and the UK. Delta promised more initiatives to come later this year, such as the launch of more codeshare routes, aligning schedules to reduce connection times and “smoothing the airport experience from check-in to baggage claim.”