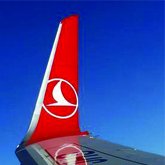 Boeing will pay Turkish Airlines an unspecified amount of “financial compensation” for losses incurred by the carrier due to grounded and undelivered 737 MAX planes. The announcement comes after Turkish Airlines said earlier this month it was preparing to bring a lawsuit against Boeing due to uncertainty regarding the 737 MAX and its losses. One of Boeing’s biggest customers, Turkish Airlines did not specify how much Boeing will shell out. According to some reports, the payout will total $225 million, with $150 million in compensation and $75 million covering costs such as spare parts and training. The Turkish flagship carrier has 24 Boeing 737 MAX planes in its fleet and is one of a number of airlines that have been seeking compensation from Boeing for the financial impact of the grounding.