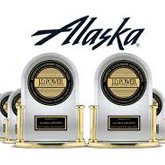 Alaska Airlines has been recognized as the highest ranked airline in customer satisfaction among traditional carriers in the J.D. Power 2019 North America Airline Satisfaction Study. It won this year with its best score ever. The J.D. Power study measures the satisfaction of business and leisure travelers who flew a major North American carrier between March 2018 and March 2019. Alaska won among traditional airlines with an overall score of 801, up 26 points from 2018. This is the first time Alaska has scored higher than 800 on the J.D. Power 1,000-point scale. In this year's study, Alaska received the highest ranking in six out of seven categories among traditional airlines: aircraft; check-in; cost and fees; boarding/deplaning/baggage; flight crew; and reservations. The scores are an improvement in every category compared with last year, with significant improvement in the inflight service category.