Two Cents from the Company Dime 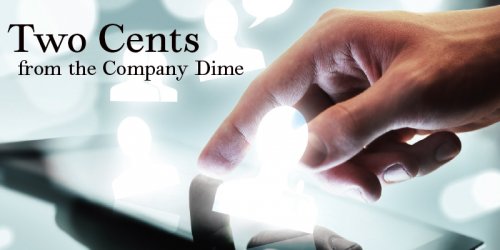 LATAM Ditches AA, Partners with Delta
Delta Air Lines’ new partnership with LATAM Airlines Group, announced this fall, makes a few things clear. For starters, many corporate travelers between the Americas will start using Delta. Code sharing could kick in before year-end. Together, Delta and LATAM will claim the leading spot on routes between the United States and Argentina, Brazil, Chile, Ecuador and Peru.A next step is a Delta-LATAM antitrust-immunized joint venture that seems at least a year or two off. Should it clear regulatory hurdles, the JV would allow closer coordination in areas like corporate sales.Delta will start severing ties with Brazil's Gol. Delta president Glen Hauenstein said Gol had a “distribution network that is not really symmetric to the more traditional carriers.”And LATAM will wind down agreements with American Airlines and the Oneworld alliance. AA said it understood that LATAM wanted a US partner "that isn’t burdened" by a Chilean court ruling restricting the AA-LATAM partnership. It also expressed a desire to grow its own Latin America presence, which compared to US rivals is sizable. AA already announced additional service between Miami and Lima, Santiago and São Paulo.Delta's Latin America move exemplifies a greater emphasis in recent years on bilateral JVs rather than global alliances. LATAM won't join Delta's SkyTeam. Delta CEO Ed Bastian said alliances had “not fulfilled” the vision of seamless travel across member airlines. “And so, we are not going to sit around and wait for the alliances to develop their technologies,” he said during a call with Wall Street analysts. “We're working with them. But it's also important that Delta take control of our customer experiences.”It's been building stability into its partnerships. Delta owns pieces of Aeroméxico (49 percent), Virgin Atlantic (49 percent), Korean Air Lines (10 percent) and China Eastern (4 percent). The LATAM deal, according to Bastian, is Delta's biggest since the Northwest merger a decade ago. Should it close, Delta would get a 20 percent stake in LATAM for $1.9 billion and throw in another $350 million to build the partnership.The transaction is “consistent with Delta's honed practice of establishing equity stakes – accompanied by board representation – and exerting influence over margin-challenged airlines located in critical geographies,” according to J.P. Morgan analyst Jamie Baker. This development “further strengthens the investor perception that Delta remains at the top of its strategic game, while American is once again outgunned.”

For Some, Outsourcing Pros Outweigh Cons
CWT's Solutions Group renewed outsourcing deals with all 26 clients using the service since introducing it last year. The TMC said 30 percent of clients surveyed in June planned to outsource more of their travel programs. CWT, other TMCs and some independent consultancies can embed full- or part-time resources in a client organization. That can be a travel manager or people helping with OBT and TMC implementations, communications or other operational and strategic functions. The approach isn't for everyone. It's not hard to find concerns about conflicts of interest and job security fears among internal travel managers. If an outsourced travel manager from a TMC is placed within a client organization, which company's goals take priority? There also are implications from using contractors rather than full-time employees. Smaller companies may like the concept more than larger ones that can afford to dedicate resources. But travel programs at some medium-size and large organizations are growing fast and the pre-existing travel teams are overwhelmed. Regardless of the rationale, companies turning to outsourcing should establish governance and oversight to ensure objectives are aligned.

TMCs Keep the NDC Ball Rolling
Corporate travel intermediaries are stepping up their NDC efforts. In September BCD Travel announced the ability to manage communications with airlines via XML, the protocol that underpins NDC. Still, BCD cited ongoing “challenges and limitations” related to integrating online booking tools, reporting and duty of care requirements.Also in September, CWT added to its NDC focus by naming a vice president of air distribution partnerships. This summer, American Express Global Business Travel began processing live, NDC-compliant bookings on American Airlines through Amadeus. In October GBT said it began piloting NDC bookings in its Neo online booking tool via Amadeus and Sabre. A full release is expected in 2020.Expedia's Egencia, Australia-based Corporate Travel Management and SAP Concur Travel each recently added Lufthansa's "NDC Smart Offer" fares to their booking tools.According to a Concur spokesperson, client companies must access all of a carrier’s content “either” through GDSs or through Concur partner Travelfusion. If they choose Travelfusion, a “Select Access" fee applies.SAP Concur officials have said they did not see client demand for access to Lufthansa through Travelfusion until the carrier removed its "Light" fares from GDSs last year. Buyers generally pay additional fees for such alternative access if they want their TMCs to support it.What should travel buyers do about NDC at this point? Some say there's little risk in doing nothing. Others emphasize staying informed. Direct Travel SVP of operations Christine Sikes during a September meeting of GBTA's New Jersey chapter advised travel managers to assess policies. “Today everyone has a lowest logical airfare policy,” she said. "It's been a benchmark for years. Now how do you start to compare a ticket with a bag to one that doesn’t to one with WiFi? You should start those dialogues with the industry to understand it as best you can.”Speaking alongside Sikes, Travel and Transport EVP and CIO Mike Kubasik cited geography and differing business drivers as factors. The situation in the competitive US market is a lot different than in Germany's. “The dirty little secret is economics,” he added. “There's an ecosystem today between the airlines, GDSs and TMCs that relates to client transaction fees. If the operations are disrupted and economics also change, it will cost the buyer in the end. I don't think that this has been fleshed out yet because the number of transactions is still so low, and some of the commercials are still being sorted out between the airlines and GDSs.”

Direct Travel Follows BCD Travel in Creating Technology Marketplace
Direct Travel created a marketplace of technologies and services that clients can plug into travel programs. It's similar to BCD Travel's SolutionSource, which recently gave external developers more application programming interfaces to work with. Direct Travel's TravelStack portfolio has more than 30 such add-ons. They include online booking tools, expense management system providers and travel risk specialists; Conferma and CSI for virtual payments; Dinova for dining programs; CIBT for visa and passport services; SpotHero and The Parking Spot; Urbandoor (now owned by Airbnb); and Rocketrip for employee incentive programs.“With how quickly technology is moving, there is a lot of turnover in terms of what ‘best in class’ is, based upon what you need,” Sikes said. “Everybody wants something that is a little bit different. You have to be able to solve for that.” The marketplace concept is cost-effective. To build and maintain proprietary technology, Sikes said, would “add $10 to $12 a transaction.”Kubasik said that when TMCs create marketplaces, “it's important they are vetting these vendors.” That's because startups often don't have enough bandwidth to ensure compliance to various data privacy and security regulations.